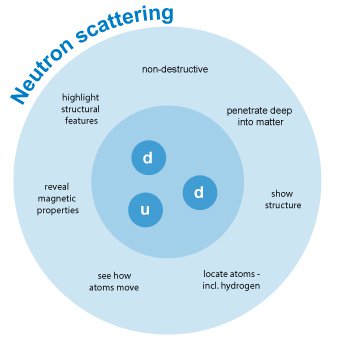 For research purposes, neutrons are released from their role as a component part of matter, and are used as probes with which researchers can look inside a very wide variety of materials. With neutrons one can, for instance, look inside a big car engine, investigate drug delivery, see how plants uptake water, get insights into the development of superconductors, etc..

In a neutron scattering experiment, a neutron beam passes through the sample or technical component under investigation. By observing how the direction or velocity of the neutron changes, researchers learn about the structure, composition or dynamics of the sample on an atomic scale. Having this basic information we can understand the physical, chemical or biological properties of a material.

When beams of neutrons are used to probe small samples of materials they have the power to reveal what cannot be seen using other types of radiation. Neutrons appear to behave either as particles or as waves or as microscopic magnetic dipoles. It is these specific properties which enable them to yield information which is often impossible to obtain using other techniques.

Beams of neutrons can be scattered by materials. If the neutron energy is chosen correctly, then their wavelength is similar to the distances between atoms or molecules, and the pattern of scattered neutrons can be used to produce an image of the atomic structure. 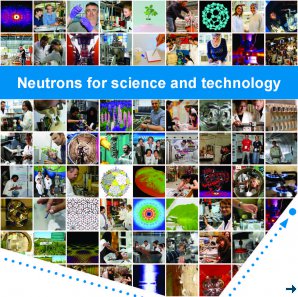 What can neutrons show?

Neutrons can show us the structure of matter, where atoms are located and how they move. Neutrons can also help to analyse the magnetic properties of materials, at the atomic scale. Neutrons show hydrogen atoms and can be used to highlight special structural features.

How are neutrons produced?

Together with protons, neutrons form the nucleus of most atoms. Neutrons are therefore part of all the matter that surrounds us. To be used as a scientific probe and produce a beam they have to be released from the nucleus by a process called fission, as happens in a nuclear reactor using Uranium or by firing a high-energy beam of protons into a neutron-rich element such as lead or tungsten – a process called spallation. We thus need a Large Scale Facility to produce neutrons for science, like e.g. many of the partners of SINE2020.