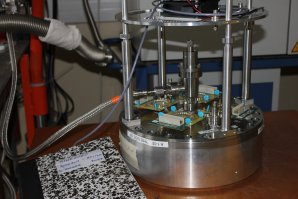 One of the gas pressure vessel filled with Helium-3 gas and a stopping gas that was used to test different prototypes.

The microstrip gas chamber (MSGC) was invented by Anton Oed at the Institut Laue-Langevin (ILL) in the 1980’s to improve the performance of gas proportional chambers. Bruno Guérard and Damien Roulier at ILL have been working on a new development in its design for SINE2020.

By design, MSGCs are only position sensitive in one dimension and so the aim of Task 9.3 in Instrumentation: Detectors is to make them two dimensional to meet the needs of reflectometry techniques at neutron sources – including the ESS – and to achieve a 1mm resolution. Let us find out what they achieved.

MGSCs function in a similar way to another popular style of detector: Multi Wires Proportional Chambers (MWPCs). However, because the electrodes in MSGCs are close together and lie in one plane, unlike the sensing wires in a MWPC which lie in different planes, they have great potential to provide higher counting rate capabilities and improved spatial resolution.

Microstrip gas chambers consist of many thin metallic anode and cathode strips on an insulating glass substrate. The electrode strips are chemically etched onto the substrate using photolithography. This set-up is then placed in a gas chamber filled with 3He to act as a neutron converter and another gas that acts as a stopping gas, for example CF4.

When neutrons enter the detector, they hit the helium gas and the following reaction occurs:

The products of the reaction start an ionization process within the gas chamber and the resulting charged particles move towards the electrodes. The stopping gas limits the range of the ionizing particles, p and 3H, to improve the spatial resolution. Electrons drift toward the anode strips until they reach the region of intense Electric Field, where charge multiplication occurs. This charge multiplication, also called avalanche, makes the measurement detectable by the electrodes. The higher the 3He pressure in the chamber, the better the gain in detection efficiency.

The close proximity of the anode and cathode strips on the same plane make it faster for positive ions to recombine, hence the density of positive charges in the conversion gap is kept to a minimum inside a MSGC. This reduces something called the space charge effect where the positive ions would hinder the collection of the electrons by the anodes, which in turn affects the counting rate.

Several components of the detector can be varied. The mixture of gas used inside the chamber and the size, layout and materials of the electrode plate can all affect the performance of the device.

To make a MSGC two-dimensionally position sensitive requires either the anodes or the cathodes to be resistive to measure the position along the strips by charge division. The other coordinate is given by the position of the active strips in the perpendicular direction. One difficulty comes from the fact that the resistance of the electrode must be in a typical range of 5-10 kOhm. By using Chromium, anode strips are generally too resistive, and cathode strips are generally not resistive enough.

In a previous project the chromium anode electrodes were coated with aluminium to reach adequate electrical resistance but when tested they showed severe ageing when CF4 was used as a stopping gas. A less chemically reactive gas mixture (Ar (90%) and Co2(10%)) was also tested but although this ArCO2 version reduced ageing it was still not stable long-term. The concept of coating chromium strips with aluminium was then abandoned. 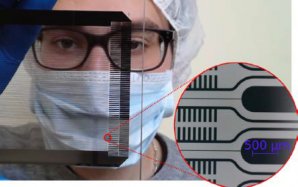 The first MSGC64. A detail of the half-cathode (in black) can be seen in the inset, with the teeth and the resistive line interconnecting them.

For SINE2020, Bruno and Damien investigated a novel resistive cathode layout to try to improve the performance of an MSGC. Here the cathodes consist of two half-cathodes made from pure chromium surrounding the same anode, and connected to each other on both ends. One half-cathode is made of teeth connected by a resistive line. The function of the teeth is to prevent the glass substrate charging up.

The resistivity of the cathode, required for two-dimensional operation, can be varied by adjusting the width of the half-cathode resistive line. The cathode signals are used for localizing each particle in both dimensions, – Y along the strips and X perpendicular to the strips. The electrical resistance of the cathode strips results in a variable signal height measured at both ends of the strips; the closer the strip connection is to the neutron interaction, the higher the signal is on the amplifier connected to this strip; this effect is exploited in the charge division process to measure the Y coordinate of the neutron impact along the strips. On the other hand, the X coordinate is measured by using a Centre-of-Gravity (CoG) method which determines the position of the neutron by using the distribution of charge collected on several neighboring channels. 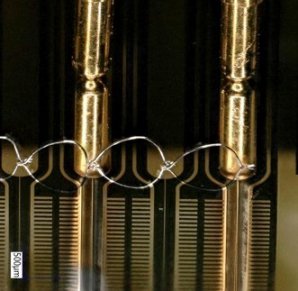 Spring probes and wires on the anode pads. Each wire bridges the anode pads upon two half cathodes. The wire bonding is performed at the Upstream Technology Platform (PTA) of Minatec in Grenoble.

This so-called MSGC64 detector prototype was fabricated at the ILL. The detector consists of a Micro-Strip plate produced by IMT (Switzerland) using a Schott S8900 electro-conductive glass substrate containing 64 anodes of 10 μm width, and 64 cathodes; the pitch was 1 mm. The anode pads are inter-connected with aluminium wires.

The plate was mounted in a gas pressure vessel containing the detection gas 3He/ CF4 mixture at a pressure of 5 bar. Despite the high cost and worldwide shortage of 3He, the decision to keep this as the neutron converter is based on its potential for performance gain compared to the relatively low volumes required (only a few litres). The overall dimension of the MSGC is 101 mm x 101 mm, and its sensitive area is 64 mm x 64 mm.

The detector was set-up, calibrated and tested. Interconnecting the anode pads using an automated wire bonding process made the device more reliable. Resolution is better than 1.2mm in the Y direction and 1mm in X direction. The device has been working well but at higher counting rates issues have arisen: the high amplification gain required in order to achieve high position resolution along the strips generates an important space charge in the gas, which results in a strong limitation of the counting rate capability of MSGC.

One way to overcome this limitation is to reduce the amplification gain and to replace the resistive charge division by a geometrical charge division. The team at ILL are currently awaiting the production of a new plate with triangular cathodes so they can test it.

In the meantime, a TRENCH Multiwire Proportional Gas Chamber has been developed which combines both the advantages of MWPC and MSGC. Preliminary results are encouraging.