Scientists at the Institut Laue-Langevin (ILL), at the Jülich Centre for Neutron Science (JCNS) in Garching, Germany and at the European Spallation Source (ESS) in Lund, Sweden have been using different crystallization methods based on exploring the phase diagram to try and achieve this.

Single crystals are solids where the atoms inside are arranged in a very ordered way. Usually, crystals are produced when a solid powder-like substance dissolved in a liquid solvent slowly comes out of the solution. An example: salt dissolved in water. When the water from this solution is removed, salt crystals are left behind. However, the size, shape and structure of the salt crystals severely depends on the conditions this occurs in. If you boil the water off quickly, you get left with salt powder. This is called precipitation. But if the water slowly evaporates away, you can get bigger, prettier crystals. This is particularly noticeable in caves underground.

Phase diagrams are a type of graph that allows crystal-forming conditions to be mapped (see Figure 1). The important information to know is the concentration of the solution (in this instance how much protein is in the solution (y –axis)) and the precipitant concentration (x-axis). A precipitant is a substance that helps precipitation of the proteins to occur by binding water molecules.

The graph tells us the ratio these parameters need to be in to form a crystal. If there is not enough protein (low concentration), the solution is undersaturated and the crystals won’t form. On the other hand, if there is too much protein (high concentration), the protein will just “crash” out and not form the orderly arranged crystal we want. 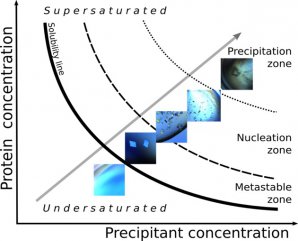 A phase diagram is divided into various areas. In the precipitation zone, the solid substances precipitate out and do not form nice crystals. It is in the nucleation zone where the crystal “seeds” start to form. However, if you want your crystals to continue to grow bigger, this happens in the metastable zone. If you are not there, the protein molecules will continue to create their own crystal seed when they leave the solution rather than adding to existing crystals to grow them bigger.

Luckily, as the proteins form the crystal, they leave the solution and descrease the protein concentration. This causes the ratio of the x-axis and y-axis values to change and the solution effectively moves to a new part of the phase diagram. The trick is to use the appropriate ratios to allow the move to occur from the nucleation zone to the metastable zone during the experiment.

Unfortunately, this is a hard challenge. Phase diagrams are different for each protein, and proteins are very sensitive to even small changes in their conditions (temperature, pH etc). Also, when you try and scale up the volume (to make bigger crystals), the physics doesn’t scale in the same way. This means that phase diagrams are used as a guide but ultimately, experiments are carried out by scientists through trial and error.

How to make crystals

There are several different crystallization methods used to make crystals from saturated solutions. All of them involve a very slow and gradual change of the solution concentration into the nucleation zone to allow a crystal to start forming and from there into the metastable zone to grow them.

The vapour diffusion method involves a droplet containing a saturated solution of the protein, the precipitant and a buffer. Within the same sealed container there is also a separate reservoir containing the same precipitant substance, but at a slightly higher concentration. Once left alone, the system wants to equalize the concentrations in the droplet and the reservoir and does so by water vapour diffusing from the droplet to the reservoir. This removes water very slowly and gradually from the droplet and the protein starts to form crystals. This method can be performed in a hanging drop arrangement where the droplet hangs from the “lid” of the system (Figure 2a, left) or in a sitting drop arrangement where the droplet sits above the reservoir (Figure 2a, right).

In a batch crystallization set-up, small droplets of the saturated protein solution are covered in oil – the most common being paraffin oil or silicon oil. Water from the solution can escape very slowly through the oil which allows very slow growth conditions for the protein to form crystals (Figure 2b).

In this method, a semi-permeable membrane exists between the droplet and the reservoir. Only small molecules and ions can pass through the membrane but not the protein molecules. A concentration gradient across the membrane allows a very gradual movement towards an equalized concentration as water leaves the droplet. This then allows protein crystals to form (Figure 2c).

The overarching aim of SINE2020’s work is to determine reliable crystal growth methods that can grow crystals of the required size for neutron techniques. It is intended that users will be able to make large crystals of their own proteins as part of their proposal submission for neutron beam time, using these methods. With the help of the user service of the DEMAX lab at the ESS the users can ask for the expression of fully deuterated proteins in addition to the crystallization. Users will hopefully know their own proteins well enough to decide what crystallization conditions (temperature, solvents etc) one can start with for the optimization of the protein crystal growth. Luckily, although it may take several weeks for some proteins to grow suitably sized crystals, neutron beam time and experiments are planned in advance and if enough time is allowed for preparation, the crystals can be ready in time.

References:
Several journal publications related to this work can be found on the Crystal Growth Publications page