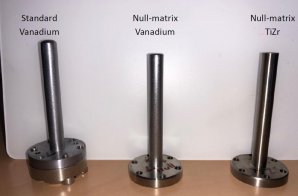 A good signal-to-background ratio is essential for a successful outcome to a neutron experiment. Unfortunately, some commonly used sample environment equipment produces unwanted signals that hide those coming from the samples being investigated.

Eddy Lelièvre-Berna, E. Bourgat-Lami, J. Gonthier, Y. Memphis. E. Suard and X. Tonon at ILL, R. Down at ISIS, Victor Laliena from ICMA in Spain and Lambert van Eijck from TU Delft in the Netherlands, have looked specifically at three of the most used sample environments – sample cans, cryostats and cryofurnaces – to see if these unwanted signals could be lowered.

These containers are used for studying powder samples at very low temperatures. Typically, they are made from aluminium or vanadium and the team has investigated null-matrix materials which reduce the coherent scattering length to zero. The materials investigated were the titanium alloy TiZr and a vanadium alloy containing about 6% nickel. When tested on PEARL at TU Delft, they both reduced the background compared to the standard sample can. The null-matrix vanadium, which reduced the background by 33%, is now being used by instrument teams at ILL.

The tail of a standard cryostat used in time-of-flight mode has been redesigned around the gadolinium oxide foil absorbing neutrons not directed to the detector. The 3-layer chamber into which the sample and the gadolinium foil are cooled is now very thin and made from a strong aluminium alloy. These components reduce the number of neutrons that do not scatter in the direction of the detector and therefore do not contribute to background noise. With this development, comparison measurements showed the signal-to-background ratio at low energies has improved up to a factor of 3.

In parallel, the heat exchanger in the cryostat was also modified to speed up cooling and heating by a factor of 3, which will save time during experiments and reduce beam time losses.

Cryofurnaces are cryostats that can work above room temperature up to about 350°C. A new tail for the cryofurnaces (Figure 2) used on powder and liquid diffractometers, known for poor signal-to-background ratios, was redesigned using a much thinner vanadium tube brazed to two heat exchangers. The thinner tube is trapped between two heat exchangers to speed up temperature changes and lessen the large temperature gradients at the sample position. After initial issues with the brazing process, the new equipment could be tested on D2B at ILL.

The new tail has reduced the background by half. The cooling and heating times have also been significantly improved. Now 3 cryofurnaces at the ILL have been upgraded.