To investigate thin-film and layered structures 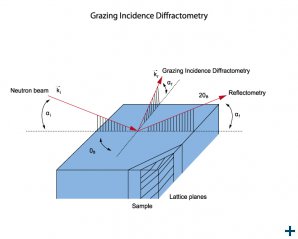 By counting the number of neutrons elastically and specularly reflected from a flat surface, as a function of glancing incidence angle, the in-plane average of the scattering density can be deduced at any specified distance along the normal from the surface. From this scattering length density profile, the concentration of atoms of a given type at a particular depth can, subsequently, be inferred. If, in addition, the incident beam is polarized and the resultant polarization of the reflected beam is analysed, it also becomes possible to distinguish, in microscopic detail, possible magnetic contributions to the scattering density.