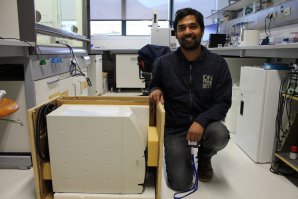 Krishna and the newly delivered ELSD

Neutron techniques are good for studying light atoms like hydrogen – great for biological molecules that contain large numbers of them. Neutrons are particularly sensitive to isotopic substitution of hydrogen (1H) with deuterium (2H) and this allows contrast techniques to be used to study molecules in detail. For this, users need to prepare deuterated versions of the biological molecules that they want to study. However, these per-deuterated molecules are rarely available from commercial suppliers because the market for them is of limited value. Here SINE2020 aims to fill the gap.

Task 5.2 of the Chemical Deuteration work package is to setup procedures for extraction, purification and analysis of small-deuterated biomolecules. These molecules will then be available to users of neutron techniques and via the DEUNET platform partners. The main biomolecules involved are phospholipids, sterols (e.g. cholesterol) and sphingolipids – all types of molecules that can be found in biological membranes and therefore have important applications in pharmaceuticals. Lipids also have roles in the cosmetics, food and nanotechnology sectors so the ability to study them using neutrons would be invaluable to many researchers and industrial companies.

Krishna Batchu, under the supervision of Giovanna Fragneto, at ILL is carrying out the research for SINE2020, building on work done by Rachel Morrison before him. So far, work has concentrated on various phospholipids that mainly include phosphatidylethanolamine (PE), phosphatidylcholine (PC) and phosphatidylserine (PS). They are being prepared using cell cultures of the yeast strain Pichia pastoris as it works well for lipid extraction and grows successfully in deuterated media (in order to produce the deuterated versions). 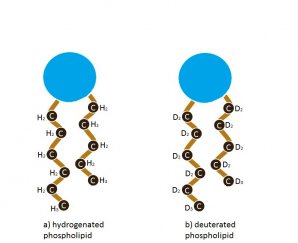 Phospholipids are amphipathic molecules that consist of a water-loving head group and two water-hating “legs” (Figure 1). The “legs” are chains of carbon atoms attached to hydrogen (Figure 1 a) (or deuterium atoms – Figure 1 b). Their compositions in the cellular membranes are enormously complex with membranes typically comprising several thousand chemically distinct molecular species of lipids. The chains within can vary in length, usually from between 6 and 24 carbon atoms, and contain between 0 and 12 double bonds between the carbon atoms – the so-called saturation level. The more double bonds, the more unsaturated the chain.

Phospholipid homeostasis in a biological system is maintained via three key cellular processes: 1) Biosynthesis 2) Remodeling and 3) Degradation. In the yeast cells (in the culture) exists a dedicated molecular machinery for fatty acid metabolism causing both elongation and unsaturation of the chain, catalyzed by elongases and desaturases respectively, during the production process. Once biosynthesized, their incorporation into various phospholipids is catalyzed by a number of acyltransferases thus leading to the existence of a larger repertoire of individual molecular species. The challenge is that with so many variables the number of types of phospholipids produced is vast.

Part of the project has studied how growth conditions affect the type of lipids produced. No significant differences have been found that suggest harvesting time affects the lipid profile but there is some indication that carbon source has an effect and that there is more unsaturation if growth occurs at lower temperatures.

Once a cell culture has grown, the lipids within it need to be extracted, separated and purified. This has been achieved, for both hydrogenated and deuterated PC, PS and PE molecules, using a two-step process: a solid phase extraction followed by purification via a normal phase column coupled to a HPLC system. Hydrogenated versions have been prepared in order to compare them with the deuterated species and for initially testing processes to avoid wasting expensive deuterium.

Now the challenge is to purify individual molecular species, identify them and analyse them using a Mass Spectrometric approach. A brand new and more sensitive ELSD light scattering detector that has just arrived at ILL will hopefully make all the difference to this work as it can identify biomolecules that could not be reliably seen with the UV techniques used to date.

And of course the ultimate aim is to carefully document all the procedures and protocols for producing these deuterated biomolecules to ensure users can always have access to them in the future.